Hungary is a partner country under the Vienna Initiative NPL framework.

As part of the Vienna Initiative NPL workstream, EBRD supported the analysis of corporate restructuring and insolvency in Hungary to identify the key obstacles. The government also committed to best practices in resolving NPLs under a Memorandum of Understanding with the EBRD in February 2015. The results of the analysis were presented at a workshop hosted by the National Bank of Hungary ("MNB") in March 2015.

Several measures have subsequently been taken by the Hungarian authorities, such as amending the Personal Bankruptcy Act (September 2015) and the official start of operation of the asset management company MARK (Q1 2016). Further actions are in progress, such as the development of new principles on multi-creditor out-of-court restructuring (‘Budapest Approach’) and a future amendment to the Bankruptcy Act. Regarding the former, a second workshop was held in January 2016 with government officials, bank representatives and legal professionals. EBRD commissioned the production of a report, and the draft MNB recommendation on out-of-court restructuring was presented to banks and industry professionals at a workshop in Budapest in October 2016. The final recommendation was officially issued in June 2017. [/reveal] 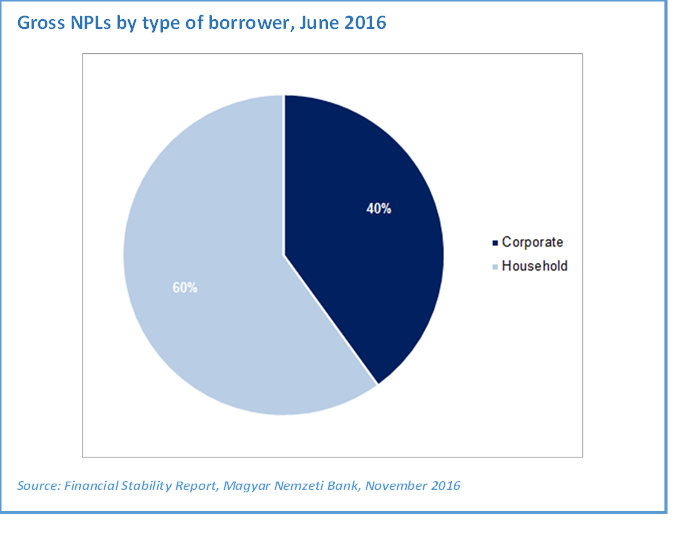 [reveal]The ratio of non-performing loans declined in H1 2016, although further decrease is necessary. So far, the results of the decline are mainly attributable to regulatory measures, in particular to the active role played by the Central Bank. The turnaround of lending also helps to outgrow the problem of nonperforming loans; nonetheless the active involvement of the Central Bank is still necessary, while the steps taken to date continue to urge banks to solve the problem.

The historically robust shock absorbing capacity of the banking sector allows the working off of the legacy of the pre-crisis overheated lending and the cleaning of the non-performing loan portfolio in a decisive manner. While the corporate NPL ratio is still approximately 15%, it can reach the 5% level within the next two years based on the market catalyser role of the Hungarian Restructuring and Debt Management Private Company Limited by Shares (MARK Ltd). In the household portfolio, the conversion of FX loans into forints combined with the low interest rate level considerably reduced the parameters of credit risk, and the share of household loans with over 90 days of delinquency is expected to decrease from the 16% mark as of June 2016 to levels close to 13% in the next two years.

[reveal]While balance sheets have strengthened with progress in reducing NPLs and FX mismatches, it is important to remain prudent to guard against other risks including those that could arise from increased real estate prices. Staff therefore welcomes the strengthening of the macroprudential framework, which is timely as the re-leverage cycle starts to take off. In particular, debt cap rules, which the authorities noted could have helped contain the credit-fueled boom-bust cycle during the global financial crisis, were introduced. The MNB and staff agreed that macroprudential measures should focus on addressing systemic risks. Other concerns such as supply bottlenecks should be addressed directly through structural reforms. The authorities believe that the operational costs of many Hungarian banks are relatively high. Consolidation among the many cooperative credit institutions is expected to continue in 2017. The authorities agreed with staff that consolidation of the banking industry should be market determined. [/reveal] See full text

[reveal]The banking system has strengthened substantially in the past two years. The sector’s profitability has been helped by the improving economic environment and by a reduction in taxes on banks. Prompted by regulation, financial institutions continued cleaning up their portfolios of non-performing loans.

Although declining, the level of NPLs remains high. The NPL ratio peaked in 2014 (Graph 3.2.1). Following the conversion of foreign-currency mortgages and a pick-up in economic growth, also reflected in real estate valuations, banks’ asset quality has been gradually improving. NPL ratios stood at 16.9% and 7.1% in the retail and corporate sectors respectively in the first half of 2016. Although the absolute level is still high in comparison to other Member States, they are well provisioned.

In that context, lending to the private sector is improving, but credit growth remains modest. While banks’ lending capacity is close to a historical high, their willingness to lend remains limited, especially to the corporate sector. Lending is also dampened by their sizeable amount of non-performing loans. The central bank launched various schemes to promote lending to small firms, which picked up significantly in 2016. Lending to households also improved in 2016, as the new government housing support scheme and growing property prices started to spur households’ borrowing. However, overall credit growth is not yet strong enough to support economic growth.[/reveal] See full text

[reveal]Hungarian banks report that credit demand has been increasing significantly (well above CESEE average) and supply conditions have been catching up. NPL figures have been improving significantly both in the corporate and the retail segments. The improvement is in line with the general developments of NPLs in CESEE, but yet more pronounced. Further progress in the resolution of NPLs is expected in the coming months.[/reveal] See full text

[reveal]The government committed to gradually reduce bank taxes, to reprivatise two commercial banks recently acquired by the Hungarian state, and to assist in reducing non-performing loans. Measures have been taken to address bad household debt. Delinquency rates are high among household mortgage borrowers (close to a quarter of mortgages are classified as NPL). The Hungarian Asset Management Company, with capacity to purchase a total of 35 000 dwellings, is targeting non-performing debtors in the most difficult financial situation. Mortgage holders who are excessively indebted can also initiate a debt settlement procedure under the Personal Bankruptcy Act adopted in 2015. Debtors have in general improved cooperation with lenders. This was helped by a recommendation issued to credit institutions by the central bank. The latter determined the expected minimum framework of cooperation between debtors and creditors.

Important steps were also taken to tackle nonperforming corporate loans. The asset management company established by the central bank (MARK) officially started operating in 2016. It aims to tackle the sizeable number of distressed commercial real estate loans and more generally to initiate the clean-up of banks’ balance sheets by selling their non-performing portfolios on the market. The central bank is also working on a new recommendation which will set out best practice guidelines on out-of-court restructuring and consensual settlement of NPLs in the corporate sector. The recommendation is designed to encourage lenders to adopt a more cooperative and coordinated approach where more than one financial creditor is involved. It could become an important tool for resolving such loans and improve the depth of the market for distressed assets in Hungary.[/reveal] See full text

[reveal]EBRD will also continue its cooperation with the Government and the Hungarian National Bank (MNB) as they take steps to enhance the legislative and institutional framework in support of NPL resolution. In this context, the Bank will continue to provide policy advice and technical assistance to enable faster and more efficient NPL resolution under the Vienna Initiative. Amongst others, EBRD will: 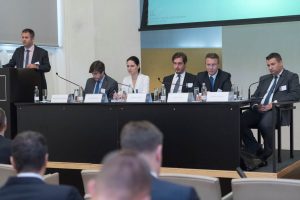 [reveal] On 12 October 2017, the Magyar National Bank (MNB) hosted a workshop in Budapest to foster adoption of the new out-of-court restructuring recommendation (OOCR Recommendation) it officially issued in June 2017. The event, jointly organized by MNB and EBRD under the NPL work stream of the Vienna Initiative, brought together leading banking groups operating in Hungary, as well as financial and legal advisors and representatives from local authorities.

The workshop is the continuation of a fruitful collaboration initiated over two years ago between the MNB and the EBRD to address the NPL challenge in Hungary. Hungary has taken positive steps to reduce its stock of bad debt, with the NPL ratio recording a significant drop to 5.4 per cent as of June 2017, according to IMF data (against 12.5 per cent two years earlier). In June 2017, the MNB officially issued the OOCR Recommendation (which was drafted under the guidance and technical support of the EBRD). The workshop was designed to promote the use of the OOCR Recommendation, which is expected to lead to greater cooperation between banks on corporate restructuring, but also on consensual settlement and enforcement of security out of court. The workshop also highlighted that further reforms to address NPLs were needed, in particular in the areas of (i) bankruptcy framework, (ii) skills in judiciary system as well as in bank workout units and (iii) alignment with and implementation of new EU regulations on NPLs. 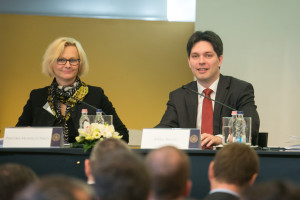 [reveal]The Central Bank of Hungary (MNB) and the European Bank for Reconstruction and Development (EBRD) held a prominently attended workshop, on 3 March 2015, under the Vienna Initiative on ways to assist banks’ and the authorities’ efforts at the resolution of NPLs through concrete and sustainable actions. Leading bank groups operating in Hungary, potential investors and IFIs discussed the legal, tax and regulatory environment in Hungary for NPL resolution. The participants also examined in-house NPL management, including out-of-court restructuring and ways to facilitate sales of corporate NPL portfolios as well as experiences with asset management companies (“bad banks”).

Follow-up actions identified during the workshop include:

For more information on the event and its outcomes, please click on the links below.

Analysis of Corporate Restructuring and Insolvency in Hungary – Final Report 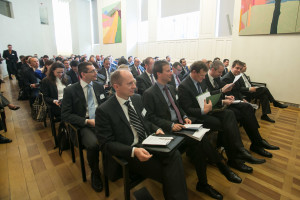