Bulgaria's NPL stock is relatively high at €4.5 billion in December 2015, equivalent to a NPL ratio of 18.1% and a coverage ratio of 51.5%. Non-financial corporations accounted for 70% of the stock of gross NPLs, households for 29% and others for 1%.

The debt of non-financial corporations stood at over 100% of GDP. It is also highly concentrated. Based on a forthcoming analysis of firm-level data, one quarter of firms accounts for about two thirds of total outstanding net debt, while about 9% of firms are extremely leveraged (the leverage ratio exceeds 10). The 20 largest debtors alone account for almost 40% of the overall corporate debt overhang. Neverheless, based on the record of revenue growth and return on capital, Bulgarian firms are performing relatively well as compared to the regional peers. 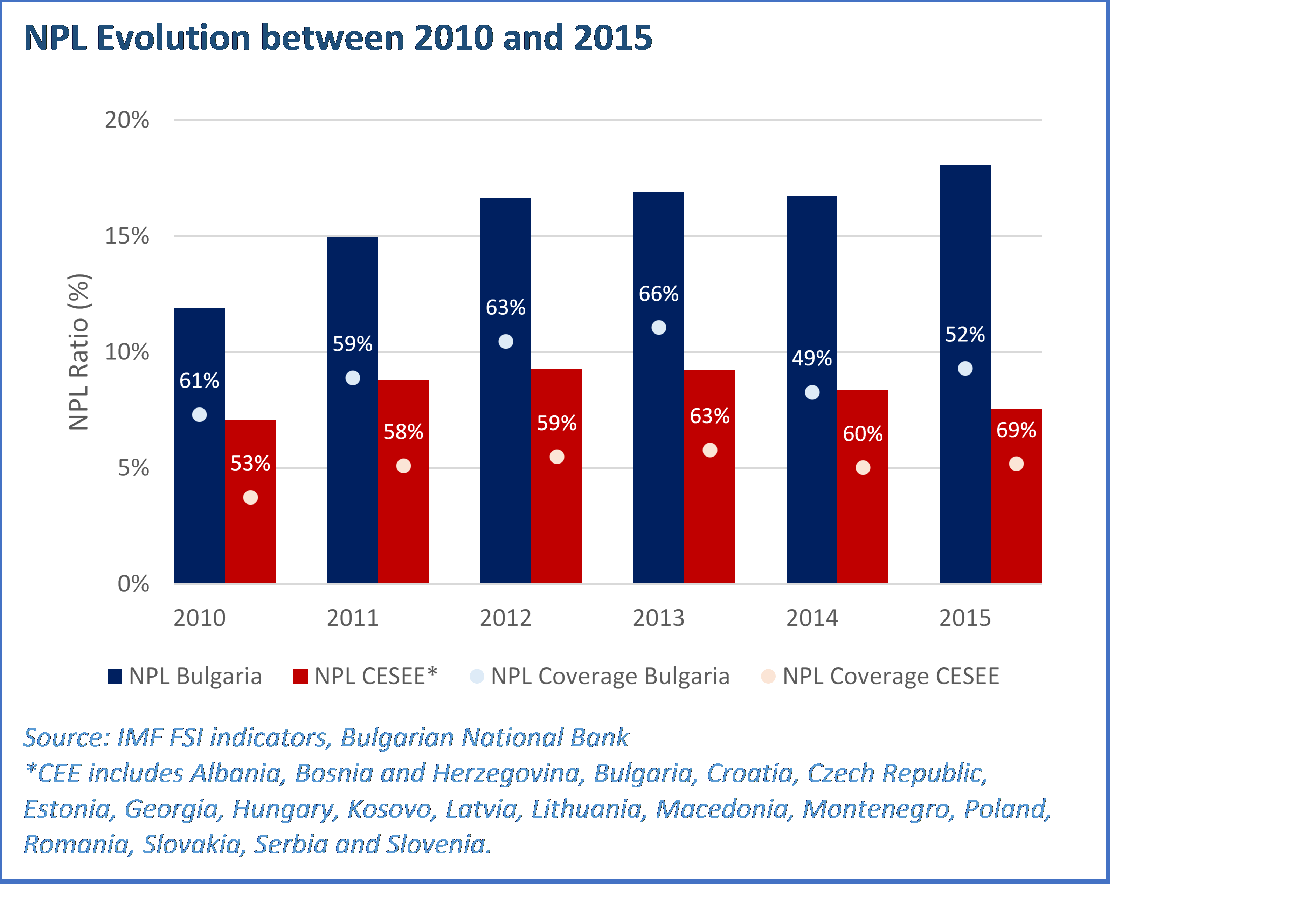 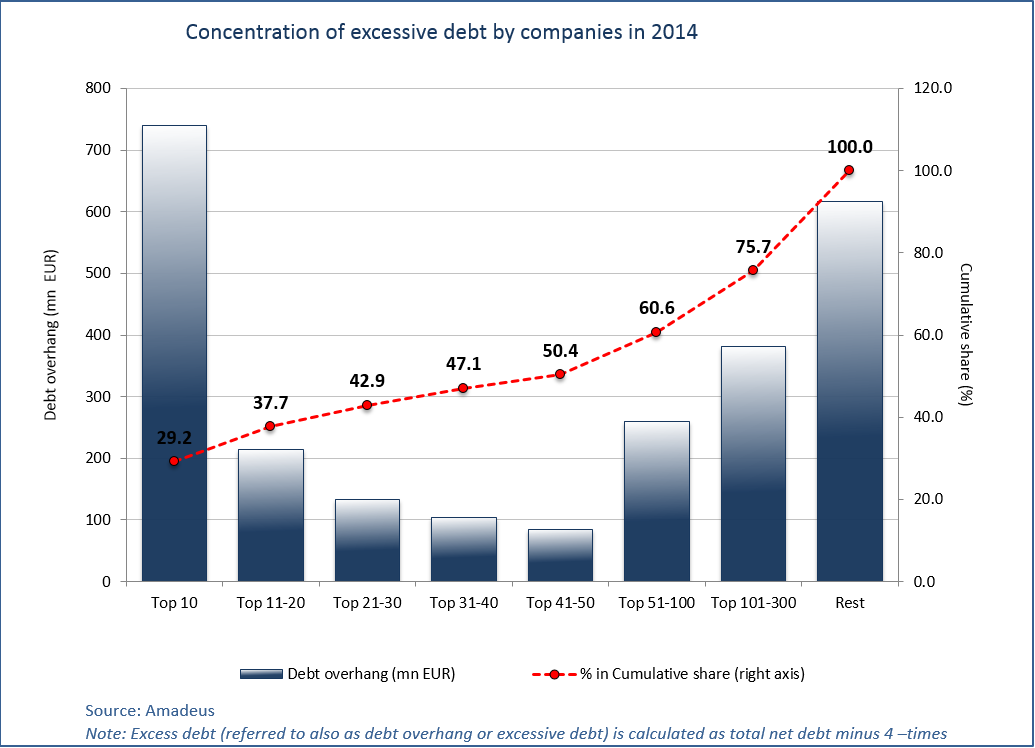 [reveal]The FSAP Technical Note recommends that the BNB adopt a comprehensive strategy in the near term to achieve a substantive reduction in NPL levels over a three- to five-year time horizon. The strategy should focus on more intensive measures to enhance bank practices in three main areas: (i) loan loss provisioning (LLP); (ii) loan write-downs of NPLs, in whole or in part, where collection is unlikely; and (iii) collateral valuation. This effort would be supported further by enhanced supervisory guidance, supervisory reporting, and risk disclosure. Moreover, it should include efforts to improve banks’ early warning systems (EWS), and to develop the NPL market.[/reveal]See full text

[reveal] The Bulgarian legal framework governing creditor/debtor relationships provides several means for protecting credit and minimizing the risks of non-performance and default. However, the laws and institutions governing security rights over both immovable and movable assets should be improved. This includes: (i) improving the land registration system as well as data collection, access and consistency in the Central Pledge Registry (records non-possessory security rights over movable assets; currently deemed expensive and not accessible online) and Central Credit Registry (debtor information) (ii) reviewing the insolvency regime (the bankruptcy legislation is rather comprehensive but in practice, insolvency proceedings are not working effectively) and fostering a culture of out-of-court collective negotiation and agreements (workouts) and (iii) enhancing the quality and effectiveness of the judiciary (e.g. enforcement of unpaid claims is highly inefficient, negatively affecting loan recovery rates; the regulation of insolvency representatives (syndics or trustees) is not entirely in accordance with international good practice).[/reveal]See full text

[reveal]Credit risk sharpness underwent no significant changes over the second quarter of 2015. The dynamics over the period was characterised by the slow growth of NPLs and the impairment of those exposures. Higher impairment in the banking system was also reported and as a result the degree of coverage of NPLs and advances with accumulated impairment was 52.3% by end-June.[/reveal] See full text

[reveal]Risks to banking sector stability remain. These risks include: (1) relatively high level of NPLs on a gross basis reflecting prolonged economic stagnation; (2) relatively low coverage of NPLs by reserves; (3) possible governance issues in other domestic banks; and (4) possible external shocks that could impact parents of foreign banks operating in Bulgaria (worsening of Greek crisis, loss suffered by some Western European banks in Russia and Ukraine).

With the end of capital flows from abroad and worsened economic outlook banks became more cautious with lending and credit growth has declined to less than 1% per year since 2008. Firms and households started to deleverage and gross NPLs increased from less than 3% of total gross loans in 2008. At the same time, banks have managed to offset the effects of growing NPLs by strengthening of capital buffers. Sectors, such as construction, trade, and tourism, which were borrowing extensively before 2008, were now reducing rapidly their exposures. At the same time, real estate, manufacturing, electricity and gas, and agriculture continued to borrow.[/reveal]  See full text

[reveal]Deleveraging pressures on non-financial corporations, amplified by deflation, could
dampen investment and growth in the short and medium term. A large proportion of
corporate liabilities, also seen as part of the negative net international investment position,
are in the form of cross-border intra-company loans. Nevertheless, deflationary pressures
could limit companies’ debt servicing capacity. Furthermore, parts of the economy may face
credit constraints during banking sector restructuring after the collapse of KTB. Corporate liabilities in the non-financial sector — including arrears and liabilities towards the government — may also be affected, creating a negative feedback loop for the entire economy.[/reveal]  See full text

[reveal]NPL ratios improved for a large majority of respondents over H1 2016, significantly exceeding developments in the CESEE region. Improvements were reported for both the corporate and the retail segment. This is consistent with reports from the central bank in Bulgaria for large write-offs and portfolio restructuring across the banking sector in the country. Improvements are expected to continue over the second half of 2016 in both segments. A high ratio of NPLs still imposes large, albeit declining, costs on the banking system. NPLs remain well provisioned. [/reveal] See full text

EBRD, Strategy for Bulgaria, as approved by the board of directors at its meeting on 8 July 2015,

[reveal]EBRD strategy in Bulgaria is to strengthen the financial sector intermediation through targeted investments and improved governance.

Some of the key strategic priorities related to NPLs are:

[reveal] On 20 September 2017, the European Bank for Reconstruction (EBRD) hosted a workshop in Sofia to discuss practical ways to enhance NPLs resolution and investments in Bulgaria. The event, organized by EBRD under the NPL work stream of the Vienna Initiative, brought together leading banking groups operating in Bulgaria, domestic and regional investors, financial and legal advisors as well as representatives from the Bulgarian National Bank (BNB), government authorities, European institutions, the IMF, the World Bank Group and the EBRD. Key issues identified as impediments to NPL resolution include (i) the need to increase transparency (especially for collateral valuation) and comparability of data (ii) the development of servicing capacity and (iii) the development of a framework for out-of-court restructuring (OOCR). The event was the occasion for international financial institutions (EBRD, WB, IMF) to reiterate their commitment to working with the authorities to find a sustainable resolution to the NPL problem. [/reveal]